The Invisible Library by Genevieve Cogman 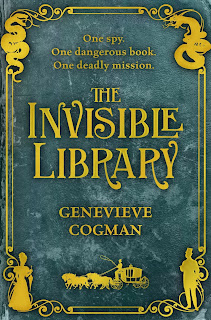 “She just wanted – had always wanted – a good book to read.”

I’m sure we can all relate to that! Put a book about a mysterious secret library in front of me and you can bet I am going to pick that book up and read it. Such a premise is irresistible to many readers I’m sure. If you love a bit of fantasy and adventure this series is for you. There are alternate worlds, dragons, fae, and a special language which librarians can use to manipulate things!

Irene is a junior librarian. Her job mainly consists of missions to alternate worlds to retrieve books, which are then stored in the Library to create links which help to keep the worlds in balance. The missions are often dangerous and there can be competition for the books they are attempting to acquire. The book dives in to a mission where Irene is in a world under cover as a boarding school cleaner. She acquires her target book and escapes the world back to the Library (after being chased by hellhounds). Irene is hoping to have some time for her own projects, but her seniors have other plans.

Irene is posted in an alternate London with a new apprentice, Kai - who’s kind of hot, btw, but Irene is much too professional to concern herself with that. She is his mentor after all! This London has Victorian kind of vibes, with added zeppelins and magic. They meet many challenges including fae interference, a giant mechanical centipede, and werewolves. They also meet Vale, London’s best detective. I’m very fond of Vale as a character, he’s a bit Sherlock-ish.

The Invisible Library caught my interest enough that I went on to read book two, The Masked City, then book three, The Burning Page, which I particularly liked, then book four, The Lost Plot. I’m truly hooked on the series. It is fast paced, fantasy, mystery, and filled with a love of books. It is also feeding a bit of wanderlust with our current inability to travel. I’m really enjoying the far flung places in various alternate worlds that Irene and Kai travel to. They could be off to a high chaos Venice, or a 1920s-esque New York with prohibition in full swing, and I think there is a good level of world building. It’s just enough to set the scene and create a good feeling for the different places without labouring over every little detail and slowing the story down. I’m looking forward to seeing where they head off to in book 5, The Mortal Word. There are seven books in this series so lots of magic and mystery to sink yourself into.